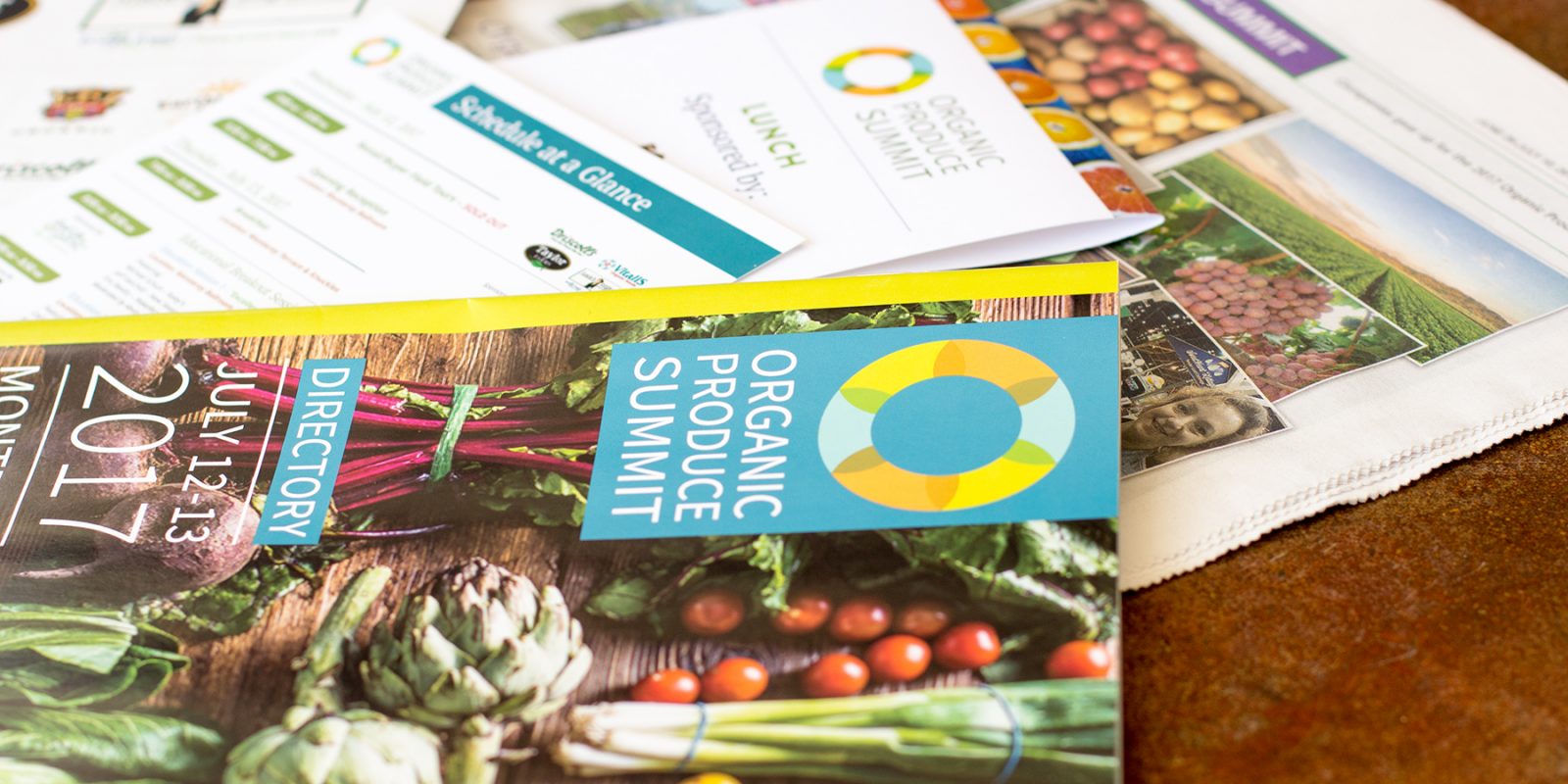 TMD Creative was approached in the spring of 2015 with an interesting idea: starting the first tradeshow solely dedicated to fresh organic produce, now a $14 billion dollar industry that continues to grow.

There have been numerous tradeshows focusing on organic food, but none that have focused exclusively on organic fruits and vegetables. As an experienced marketing firm in the agriculture industry, TMD Creative quickly became a member of the Organic Produce Summit team, presenting the inaugural show in July of 2016. It was an instant success, selling out weeks in advance, and hosting a large number of exhibitors, retail buyers, and heavyweight keynote speakers.

Organic produce companies from across the country exhibit their products at the annual Organic Produce Summit. The team from Bako Sweet is featured above.

The second annual Organic Produce Summit needed to build off the momentum of the first, while attempting to increase the size of the event. The original plan was to move the show to the new Monterey Convention Center in order to accommodate the larger number of attendees and exhibitors. The Convention Center was under construction when we agreed to terms with them, and was supposed to open in the spring of 2017.

However, as construction delays mounted, we pushed the team at the Convention Center on their ability to host the event. We quickly moved to a backup plan, and ended up at our original location at the Hyatt Conference Center, the largest event space available in Monterey with the new Convention Center still under construction.

In order to attract a larger group of organic produce growers this year, we needed to entice a large group of high volume, well-respected buyers. And in order to attract these buyers, we needed an outstanding group of industry thought leaders that would speak and engage in TED-style talks, in addition to educational sessions presented by keynote speakers. We also offered incentives to the buyers, like complimentary airfare and lodging.

The Hyatt Conference Center could hold over eighty 10’ x 10’ exhibit booths, and we had planned on having 950 attendees. While the location was being secured, TMD Creative began to work on branding the Organic Produce Summit, updating their website, and marketing the show to the fresh produce industry through press releases, e-blasts, print and digital ads, and social media.

The show sold out again this year with a 45% increase in attendees and 30% increase in the number of exhibitors. Revenue rose over 50% compared to the first year, and budgets were adhered to, keeping costs close to first-year levels.

Buzz for the event grew quickly. The Organic Produce Summit team wanted to differentiate themselves from other tradeshows by promoting their sponsors in unique ways. TMD Creative developed a series of algorithms to show sponsors their AVE (Average Value Equivalency), or the value of the advertising and public relations exposure they received for their sponsorship. Since the first show debuted in 2016, TMD Creative has been responsible for developing and implementing these algorithms, creating a viable formula for calculating the value of the various mediums that were being employed to promote the event.

As soon as the updated website was launched, it immediately cultivated registrations from growers, buyers, and organic produce companies interested in exhibiting their products. Our marketing campaign targeted buyers first through a mix of e-mail newsletters and customized ads. We then focused on attracting exhibitors and growers.

Hundreds of people were turned away in the final month, as the Hyatt Conference Center had reached its capacity. To prepare for the show, TMD Creative designed and produced signage, media presentations, and printed programs. Post-event advertisements were also created to thank sponsors for their support, and surveys were sent to attendees to gather feedback.

The annual Organic Produce Summit sold out again in its second year, successfully engaging members of the fresh produce industry from across the country. Post-event surveys have shown there is a high level of satisfaction among attendees.

“This is an incredible second year for the Organic Produce Summit,” said Ocean Mist’s Director of Marketing, Diana McClean in an interview with And Now U Know. “The caliber of retailers that we have been able to meet with is off the charts. This is a concentrated, quality group of the best of the industry. The sessions were extremely provocative and insightful which is something we really want in our industry because it is new and different.”

The event has garnered positive press on a national scale, inspiring industry news outlets such as And Now U Know, The Produce News and The Packer to publish articles. Due to its success, plans are underway to move the show to the new Monterey Conference Center in 2018, a larger venue located in downtown Monterey.

Our goal is to create successful marketing pieces and campaigns for our clients that stand the test of time. We look forward to the next 20 years of working side-by-side with our clients, setting the standard that others wish to emulate.